Xtreme on show at the 2013 World Time Attack Challenge

Xtreme Clutch together with the team at Superlap have returned home after a successful World Time Attack Challenge (WTAC) over the weekend. The Time Attack event is now in its 5th year & Xtreme Clutch were on hand once again with a trade display & as a sponsor to the event itself.

The World Time Attack Challenge is now regarded as a widely popular form of motorsport here in Australia & with the sport already attracting alot of attention in both the USA & Japan. The category has grown rapidly with interest world-wide from some very reputable tuning workshops & teams.

The WTAC was again held at the Sydney Motorsport Park over the Friday and the Saturday. The recently refurbished track saw lap times hover around last year’s record set by the almighty “NEMO” driven by Warren Luff but a blistering 1:24.8550 from the Tilton Interiors EVO driven by Garth Walden was hard for teams to match all weekend giving the crew at Tilton the outright win.

The Tectaloy Drift Challenge which was held in conjunction with the Time Attack was held on both the Friday & Saturday Night. The Tectaloy Drift Challenge saw many Xtreme Sponsored drivers’ compete in a Top 32 Battle to determine an outright winner. Xtreme Sponsored Driver's from New Zealand were invited to compete against some of Australia's best driver's including current D1NZ Champion Gaz Whiter in his LS-powered Nissan Silvia S14,

Some Xtreme-Sponsored Australian Driver's included Beau Yates in his Toyota Sprinter AE86, Jake “the Driftsquid” Jones in his Nissan Onevia and Lloyd Smith in a borrowed Nissan Onevia to name a few. The Battles saw some of the closest battles ever seen here in Australia with outright honours going Japanese driver Daigo Saito in his Toyota Chaser, “Mad Mike” Whiddet finished in 2nd place with Gaz Whiter finishing in 3rd place.

Xtreme Clutch was also on hand throughout the show to promote & display some of their new product including the 185mm & 200mm Multi-plate Clutches, The Xtreme Conversion Kits as well as some of our 230mm range. These proved quite popular amongst workshop owners and car enthusiasts alike with much interest. 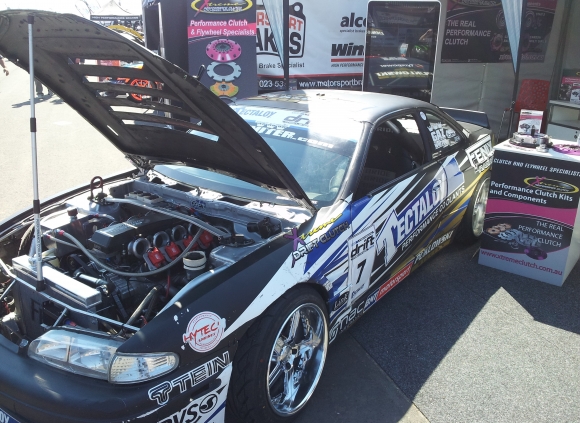