Xtreme-Sponsored “Fanga” Dan Woolhouse has won round 3 of the D1NZ Championship. Coming into the round leading the championship, Woolhouse was earmarked by many as the man to beat with his torque based V8 engine set-up and aggressive style well suited to the short & fast course.

In front of a crowd of over 5000 people, the new layout suited Dan with a convincing 3rd spot in Qualifying with Xtreme-Sponsored Gaz Whiter managing 2nd spot with Mad Mike Whiddet taking out the 1st spot. Dan worked his way through the battles with a win against Daynom Templeman, Zac Pole & Nico Reid to come up against Andrew Redward in his V8 powered Mazda FC RX7. Redward pushed hard only to spin and hand an unbeatable lead to Dan for the final run. Dan then drove a conservative run to take out the win.

“Fanga” Dan now holds a large lead going into one of his favorite tracks at Hampton Downs, where another podium would just about lock up a title win. 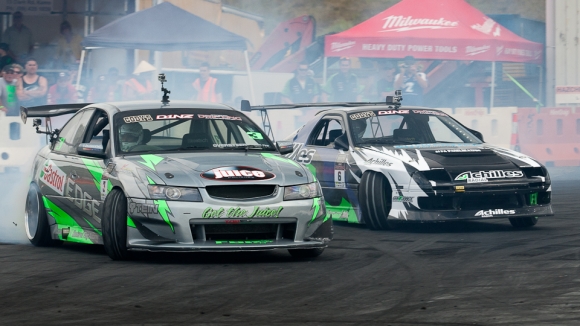