Heading into the final round held under lights in front of a 6000-strong crowd on a fast, unforgiving temporary course at the western end of the Auckland Stadium Grounds. The battle for the title of 2013/2014 Cody’s D1NZ “Drift King” looked like it was going to be between three-time former series champion Whiter in his V8-engined Nissan S14 and high profile Auckland-based drift international “Mad Mike” Whiddett (Red Bull/Speedhunters Mazda RX7).

After a strong qualifying session it was straight into battles with Gaz winning his Top 16 battle against Zac Pole, who was in a borrowed car after an engine issue in his Nissan R33 Skyline, then progressing to his Top 8 encounter when Andrew Redward spun on his chase run, only to meet his match when he came up against a hard-charging Daynom Templeman in the Top 4.

It was close but Templeman was on a roll, Gaz sealing his own fate with a half spin on the last left-hand corner of the drift section.

With Whiter only needing to finish ahead of close friend “Mad Mike” Whiddett and Curt Whittaker to win the Series, Gaz ended up with a strong 3rd place for the final round with a win over team mate Dan “Fanga” Woolhouse.

“With countless hours of testing and development, the car feels bulletproof and we feel we’ve got a really strong package from the engine right through the drivetrain, the Xtreme Clutch has held its own for 2 years now and it’s a part we needn’t worry about, reliability is everything and we couldn’t be happier with it” says Gaz Whiter. 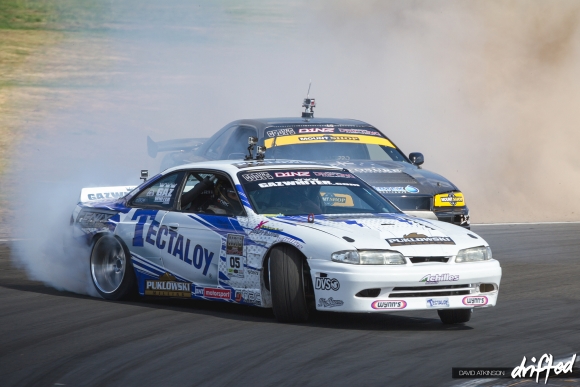