On the anniversary of yet another event win, Xtreme gets up close and personal with Andy Forrest, of AFP Subaru.

Some background first. AFP, famed British Subaru specialist tuner, has put together a monster of a GC8 WRX. As a top level tuner, AFP knows what makes Subarus tick- and what combination of performance parts are required to put together a fast, but importantly, a reliable car- and they didn’t hold back with this one. Other than decades of careful engine and chassis tuning experience, the only secret ingredient is a built up 3.6L flat 6 (commonly found in the Tribeca SUV), combined with a state of the art satellite guided traction control. The result? A world record for a street-legal WRX with a staggering 8.20 second quarter mile @ 173mph.

“The car has been performing great, and the clutch has been faultless,” says Andy. “The clutch is smooth enough that it allows me to roll progressively up to the start beams then deals easily with 1000+bhp dumped in at 6000rpm and then flat shifted at 9000rpm.” It’s an astounding result that’s well worth a Youtube view.

Xtreme’s flagship 230mm twin plate carbon clutch handles the monstrous power and shock loading with ease- and has been running in the car for an entire season with plenty of life left to give- which is not something that can be said of all clutches Andy has used. “My previous clutches have always needed changing out 2 or 3 times in a season, this one measured up like it could go run another season when inspected recently!”

It’s not just about standing starts either, the AFP Subaru almost clean sweeping the UK’s tuner shootout events last season- winning Ten of the Best (a multi-skilled event that includes elements of drag racing, top speed, and time attack), Marham 30-130mph race, MLR sprint championship (5 rounds), and another 8 separate drag racing events. In addition to setting the world record 8.20 quarter mile time, the car also set a new UK record for 30-130mph (and astounding 4.01 seconds!), and a new Impreza record for standing kilometre speed (210mph).
“I'm happy to say the Xtreme Clutch is one of the few 'fit and forget' items that I have fitted to the car, no need to warm it up either unlike some other carbon clutches,” Andy comments. “I'm well impressed… and I don't say that often!”
And there’s more to come from the car as well- the AFP Subaru most recently setting a 178mph quarter mile terminal speed on an un-prepped runway showing there’s still plenty of development potential in the car. What next from AFP? The world’s first 7 second road-legal Subaru?

It’s no wonder that the world’s best demand Xtreme Clutch. 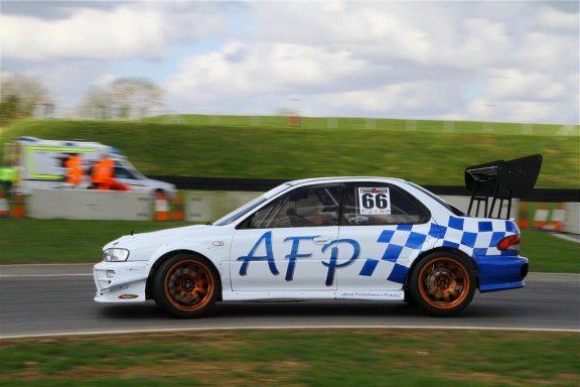