The ACS sponsored Nissan Motorsport team has endured a mixed final round of the championship at the Newcastle street circuit. The round was the first at the new street circuit and was a steep learning curve for all the teams as they adjusted setups to try and maximise the cars performance on the new 2.6km track. The Nissan team started the weekend off well, showing promising pace with Todd Kelly 3rd fastest overall in his final event as a full-time driver. ACS driver Michael Caruso was close behind clocking the 4th fastest time in the practise session.

The first race showed very promising performance for Simona De Silvestro who was able to climb her way from 22nd on the grid to a potential top 5 finish before she found the wall on lap 78. The team was able to repair the car for her to finish the race in 20th position. Michael Caruso showed excellent pace in qualifying starting race 25 from 4th on the grid. However, damage sustained after contact with Jamie Whincup early in the race resulted in a drop in pace and he crossed the line in 14th position.

Sunday’s qualifying session saw Michael Caruso starting the final race of the season from 8th place with Simona De Silvestro starting from 17th position. The dramatic final race of the season was mainly focused on the two championship contenders with Scott McLaughlin battling mid pack for his chance at the 2017 title. The ACS Nissan Motorsport team saw improved performance with Rick Kelly the first home in 4th place closely followed by Michael Caruso in 5th. Todd Kelly was able to finish his final race as a full time driver with a top 10 finish whilst Simona De Silvestro showed consistent pace to finish in 17th position, behind the chaotic battle for 11th position from title contender Scott McLaughlin and Craig Lowndes.

The team now heads into the Christmas Holidays with the 2018 season set to kick off at the Adelaide 500 held on the 1st-4th of March. 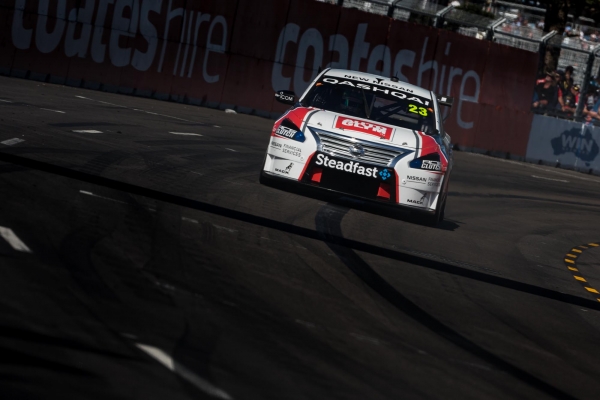