Monkhouse takes it to the best

Xtreme-Sponsored Tom Monkhouse has capped off a huge weekend with a 2nd place in the ADGP Double-header. The highly anticipated event consisted of the ADGP (Australian Drifting Grand Prix) and the Formula D (Formula Drift Asia Series) combined in the one weekend. The ADGP ran an exhibition round on the Saturday at Calder Park using the original Thunderdome layout. This saw all 32 drivers compete head to head for a top 6 spot. This top 6 spot would then allow them to progress to the once in a lifetime opportunity in the Formula Drift Asia round on the Sunday.

The Formula Asia round is the first for the 2013 series and the first time the series has been held in Australia. Tom Monkhouse capped off a successful ADGP Campaign with a 2nd place on the Saturday behind young driver talent Nick Coulson in the Achillies sponsored VE Ute.

Tom qualified 7th with Jake a close 9th. Tom then went on to battles with convincing wins over Robbie Nishida, Josh Boettcher and Oat to go through to a final battle with reigning FD Champ Daigo Saito.

The Lexus SC430 of Daigo Saito was the most powerful car in the field making an estimated 1200 RWHP with Tom Monkhouse using a borrowed Nissan Laurel from close friend Elliot Wylie making around 500RWHP. The lead run by Monkhouse was quick and all clipping points were hit but Saito was on his door the entire run. They then switched with Tom giving chase, the Lexus was able to pull a small gap on Monkhouse which caused him to struggle to keep proximity handing Saito the win and Monkhouse a close 2nd place. 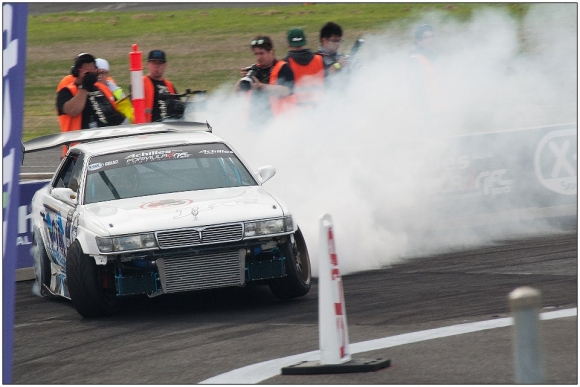