Xtreme driver Andy Forrest will be bringing his 1200hp Subaru WRX to the 2015 World Time Attack Challenge this October.

The World Time Attack Challenge in its 7th year is shaping to be one of the biggest with overseas teams venturing from all over the world including Scotland, Japan, USA, New Zealand and the UK.

Andy Forrest will be the first Scottish car and driver team to head to Australia and the news has many Subaru Enthusiasts excited for his arrival with the Subaru breaking records and startling many with its versatility and speed.

The Subaru runs a Twin Turbo set-up and has been built and stroked to a 3.6L. The horsepower climbs to well over 1200hp with a shot of NOS. The WRX has run consecutive 7.7 second quarter mile times at near on 300kmph all whilst remaining street registered.

The car has not only broken various drag strip records but it's also been developed to compete with the best as a top level time attack car. Andy has many accolades already to his name including 3 outright wins at Ten of the Best (TOTB).  The event is a multi discipline event for street legal cars that includes 1/4 mile drag, top speed over 1km standing start and a handling course over a fairly tight coned slalom track. Andy has won it outright for the past 3 years against the UK's fastest. The car runs 289kph on the 1/4 and 340kph from a standing start over the kilometre in full street trim.

Be sure to head to the 2015 World Tme Attack Challenge this October the 16th - 17th at Sydney Motorsport Park, or for further information please visit www.worldtimeattack.com 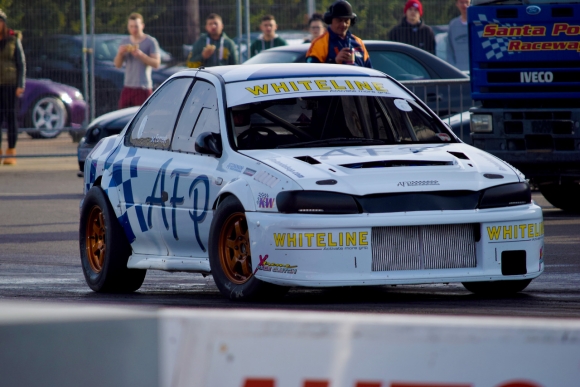